just played this for an hour before realizing i couldn't get further without the fairyrod, but i had fished everywhere so i got softlocked. very fun game, loved it.

Really smooth, fun, refreshing and calming experience. Love the way you can go deeper and deeper when you get better equipment, I got a kinda Subnautica vibe from it. The wavy effects at the water surface and underwater are pure awesomeness.
The game is still at the "unfinished demo" state (no real end), but truly enjoyable already.

What a gem! Would pay for this if I could play on Analogue Pocket.

So cute! And very relaxing! I love playing while listening to waves

I see what you did there with the 'V8' engine! Nice and relaxing game though.

not a bad game, but I am not sure if there is an actual ende to it.
like I got the first 3 rods, caught everything that is in its range and the only way left to go is uderground eastwards but the rod i too short for that (even though it doesnt seem like a bigge rone would make a difference)

This was surprisingly immersive and relaxing, good stuff

you should port this to GB

how to catch fish?

does anyone have the link to the music? the shop one especially

I really wish I had a gameboy that could play this game - it has such a nostalgic, chill and engaging vibe. Nice touches like the weather and the depth affecting sight underwater. I really like the contrast between the land vs underwater atmosphere (the music is great at emphasising this).

In an age where games tend to give you a map and instruct you where to go, I love the sense of discovery here - buying better equipment and exploring the world myself means I get greater joy when I come across a pocket of yummy fish :)

I hope you finish this game one day, I'd love to play it with the fish:money ratio balanced out.

I loved this game, but I think I ran out of fish? Is it correct to assume there isn't enough fish to buy anything worth 1200 if you bought other things beforehand? Maybe I'm just bad at looking...
Anyways, I loved the graphics of this game and it was so calming. I was really glad there was no health or stamina or anything to hinder my search for fish. It would be great if there was a release with an "endless" mode as people have been suggesting that respawns the fish, but I actually enjoyed the concept that I could empty the ocean and eventually catch all the fish.

Heartless creature. How dare you destroy the ocean! :P But yeah since the game was made for a game jam, there wasn't enough time to completely balance all the things you can buy with the amount of fish in the sea. I'm glad you enjoyed it though! It might be interesting to make a better version of this game some day ^^ 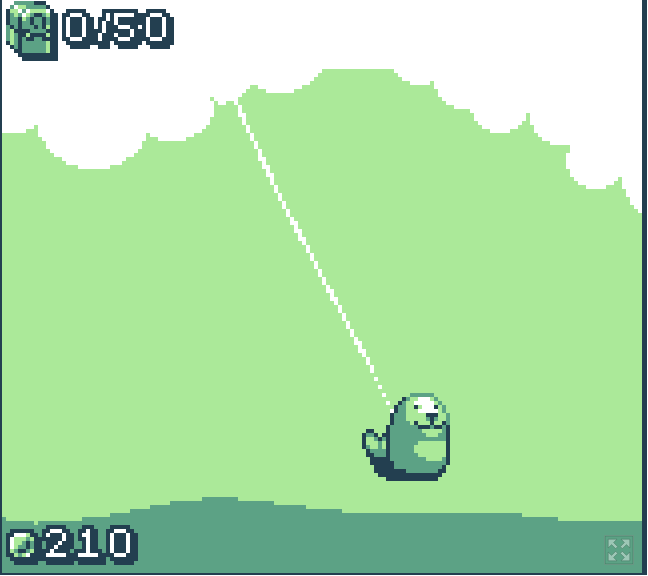 same thing happend to me lol

to bad i can,t play this on my GBA sp

I really love this game, the concept, and the areas available. I would love to see a full version. Already i can spend hours just exploring. I wish the fish respawned as well, as you can't make enough money to upgrade things to try.

I hope you finish it someday. I was really enjoying it.

I love it, but if Dob is thrown out onto land and slides back into water he stays in his derp state.

Very cute game, the color palette works well for it :) saving this for later to play more.

Nice! Love the color palette too!

Really cool.  Almost got bored and quit early from being repetitive, but then bought the first line upgrade and had fun exploring.  A couple of things:

Do the fish not respawn?  I upgraded my engine and bag and then couldn't find enough fish to upgrade my line further.  Would have spent my money differently and wasn't as much fun trying to find every single fish in the ocean.

Would be cool if there was a "town" or something.  Maybe like Harvest Moon where you try to catch as many fish as you can for the day then go into town and interact with people.  Something to break up the endless fishing would be good I think.

Hey thanks! That town / day loop idea would be very cool! Currently the fish indeed do not respawn. You can actually empty the sea eventually. :p Our idea for this jam was metroidvania+fishing, but in the end it was a bit too ambitious for a gamejam (a very common pitfall for me).

Thank you for playing and taking the time to write a comment. :)

No problem!  I think it is a very cool idea and cute art & pet

I really enjoyed playing this game. Not what I was expecting when I clicked on a fishing game, but I was not disappointed! This was utterly charming.

This is so awesome ! Can I know with what you develop your games ? ^^

Awesome game
feels like i want to "be" in this world more and more
want to discover new places \ new characters \ new events \ new game mechanics
i want to save game and after come back - load and continue "Adventure" : ]

This Game Deserves a Trailer, So I made one!

Oh...um...after calling my guy back from deep waters, my boat just floated into the sky and stayed there. :(

Cool game.
Seems like the "dead end?" is the end since there isn't much more to explore after that.

I like the concept.
Looking forwward to the full game!

This is a super cool game, but I can't figure out how to save. Is there no such feature or am I just stupid? :)

You're not stupid, there is no save feature at the moment sorry. :p

So I love fishing games, and this one is no exception. It's super cute, the palettes are nice, I love the atmosphere from the sound effects and very cute, "you're casually swimming underwater" music. I'm especially impressed with how you managed to portray lighting with the limited colour palette.

I found the controls a bit confusing at first; it's interesting how the game takes the arrow key to specifically mean to move in that specific direction rather than using the left and right arrow keys to steer and up arrow key to propel oneself forward. I think it does make more sense to have the corresponding arrow key move you in the direction you want to go; I guess...I wasn't expecting it to be like that for some odd reason. :P

It's a little odd how the screen gets super wavy when you descend. For me, it sort of took away from the atmosphere and made it look distorted. I was also able to teleport between walls in the space between two very thin brick columns underwater, where a fish was bobbing in between. Not sure if this was intentional or not, but it was unexpected, to say the least.

Aside from those two things, this was a great culmination of art, gameplay and music coming together to create a very enjoyable and adorable game. The chromatics and cadences in the swimming track are beautiful. Fantastic work for a jam entry, though.

One of the first games I've played on itch, and I love it. I hope to see this further developed :)

Very well made! I loved the artwork and music, especially the theme and graphical effects while underwater. The shop is a cool way to keep people invested without breezing through the game too fast, and the fact that you can buy additional color palettes was a nice touch. The only part where the game seemed to drag a little was when I exhausted the amount of fish and didn't seem to have enough money to continue the game. But I'm really looking forward to seeing even more of this game in the future, being one of my favorites from the GB Jam so far.

Thanks for the detailed review. :) Glad you liked it! Also surprised you managed to mostly empty the sea. In the end we didn't have enough time to make a nice game loop. So once you've caught everything the game is basically done. We'd love to add more interesting powerups to buy with the money later. At the moment you just get the lamp for free so you can see in the deep, but originally it was planned as a shop upgrade. :p Glad you enjoyed it anyway! Thanks! :)

Oh man, i wants to play a complete versions of this! The charisma! (PS.: please, post Scubabear on itchio! =])

Hey thanks! Posting ScubaBear on itch might be a good idea! :) We wanted to add a scubabear reference somewhere in this game, but fell a bit short on time! :p