Ok. First, congratulations for the project, it's a simple game but with good mechanics and a gameboy aesthetic. Now, i've found this bug when you open the door of the boss and enter and exit the room in the same time. The text appears, but the fight don't begin and the character can't enter in the boss' room to defeat him. 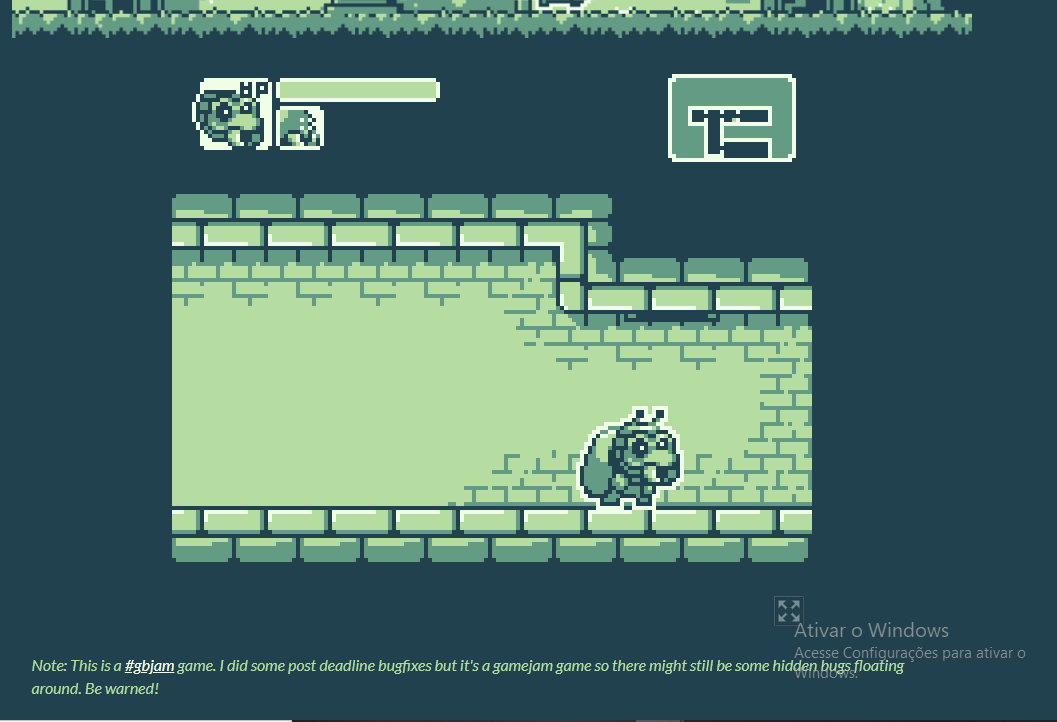 Is there a walkthrough somewhere?

How many villagers are there? It would be nice to have a counter or something.

What is the Bugmeister trying to give you clues about? I tried digging next to him to no avail.

Where is the save file?

...and now a game bug. I get to the castle in front of the door and my character is stuck in his flight pose and won't let me attack. There's also a rat spawning right at the left of the screen.

I just want to complete the game 100%. =( I beat Dracula, rescued about 9 villagers, unlocked Bugmeister and found the dev room.

how do u dig

Wait, one can actually dig?
I thought there are only those 2 buttons for jump and attack! :O

including the special area, I found 12 villagers.
maybe there are more if digging can open up new areas

Is there a way to better control the Bugmeister's bugs? They keep going in the opposite direction, getting stuck on walls etc. Also, if they go somewhere you aren't, you can't spawn anymore. Can I recall/reset them in that case (apart from changing screens)?

Also, when I was trying to make my way back from a dead-end, my Bugmeister decided to stop spawning bugs and dig(?) instead. So I died. =(

Spot-on, all that is missing is  a Gameboy version

This is one of my new favourite games the combat and exploration is so fun!!

I think the web version is quite buggy. I died and were in an infinite loop of taking damage even when Im dead already. Also  are those controls for a left handed person, cause for me as a right handed player it is REALLY awful to control the player. Maybe its just me but the controls should be revised. Other than that I really love the art style! Pretty beautiful game, you got there :D

on web I can't do anything

how do you start it? lol

This game made me realize how much fun old school platformers were on the Gameboy. While knowing this game was part of the gbjam, it still brings in all the nostalgia to another level as the artwork, the level design, and the game loop just scream this came out in the wrong era. Even with the fact that it has the "use this character until you get another unique, niche character that is required", the devs really hit the nail on the head with this game

As far as glitches go, I only faced two that arguably are really huge oversights:

1. The character chosen glitch: This glitch is when you're playing as one character but the game thinks you're another character; an example being I was playing as the Bugmeister, changed screens and the game thought I was the night. Even following the advice of others on this page, this glitch broke my game as it would only allow me to do basic jumps and no attacks, regardless of who I switched to

2. The villager count/final boss oversight: I'm not sure how this game was programmed, but the game lets you get the end screen without defeating the final boss as long as you have 10 villagers. Not too big of a deal for those who cleared the castle, before returning to town, but I ended up "beating" the game before defeating Dracula. On top of that, there is (***SPOILERS***) a secret 11th villager you can find after defeating Dracula. The issue is that if you do get the 11th villager, the game will no longer allow you to get the ending (***END SPOILERS***)

All in all, the nostalgia was real with this game. It wasn't too difficult, it has it's nice quirks with the different characters and their abilities, and it's wholly reminiscent of old school Gameboy games

o m g i defeated dracula but no bug meiseter ;(

I ran into a bug where I think saving as the witch immediately after switching to her for the first time caused the game to do various weird things, including show both a knight and a witch in town, make me show as a knight but have the witch's character UI element in the corner and be unable to use any attacks at all.

I forgot how I fixed this but eventually I got it fixed.

I understand that the dev may not be fixing bugs anymore, but I feel like I should document this, in case anyone's curious, and you never know if it'll be useful information for a speedrunner.

Pretty solid game, though I rage quit at the Dracula fight. Bosses really need health bars so I could tell how bad I'm doing. Feels like I hit Drac five hundred times and he's still trucking.

Otherwise, I like the simple set up, and switching characters to unlock different playstyles has always been one of my favorite mechanics in games. Good work!

One way to cheese the Dracula fight is to note that Dracula won't move off his bat phase if you don't destroy all the bats surrounding him.

It's easiest to accomplish this using the bugmeister.

Aha! Funnily enough, I literally just managed to beat him without even knowing that. Took a while, though!
Still have not found bugmeister yet, actually, but thanks!

I have no idea what a “Metroidvania” is, but this is a great game. I’ll definetely be coming back to this one.

I love this Metroidvania! Great work Richard, Shannon, and Diane! After I finished it, I saw this on itch.io today: https://arcadegamestudio.itch.io/the-knight-from-nokia-3310 It was posted one day ago. I don't know if you are affiliated with ArcadeGameStudio? If not, it appears they stole your game Cuckoo Castle. The title and the music are missing, but otherwise, it's Cuckoo Castle.

Definitely stolen then :p Thanks for notifying! It appears the game was already removed before I could even take a look.

No worries :) ArcadeGameStudio's page on itch.io with your game which they called "The Knight from Nokia," was up for just one day. Under the usual links on the upper right side of the page like Follow..., Add to Collection..., Rate This Game, etc. they had one stating that they entered your game (without credit) into the "OpenGameArt Winter Game Jam 2022." I followed that link. There, in the comments another itch.io user, ZomBCool https://itch.io/profile/zombcool was asking ArcadeGameStudio for information about the assets they used to make the game, which if they couldn't provide, ZomBCool said the game would have to be removed from entry. I posted a reply to ZomBCool saying I thought the game was stolen from you and provided links to your page and game, and to the ArcadeGameStudio page on itch.io. I think this may be why they took down their page so fast. But they still have a presence on itch.io https://arcadegamestudio.itch.io. I sent an email to support@itch.io so they can check out ArcadeGameStudio and make sure they aren't profiting off other creator's stuff. You can message ZomBCool about it if you'd like; they may be affiliated with the Jam. Anyway, keep up the good work!

how do you unlock the bugmeister?

Once you have the witch, you should be able to find a new path through the sewers. After which you can find the bugmeister in a room :)

I somehow seem to have broken the game and softlocked myself after dying to a sewer monster. :?

Bugmeister kind of creeps me out

what does he mean by "dig dig dig; I must reach them yes; they speak to me so I dig; will you help me find them?"

is there a secret there?

do you really wanna find out?

Then dig dig dig, you must reach them yes, they speak to you so you must dig, you must help him find them (bugmeiser gives clues is what I mean)

Beautiful game. I had so much fun. Definitely downloading the windows version to keep my progress. Good work!

Can ya add a hp bar for bosses? I always wonder how much hp does the boss has left.

Its a great game

Nice, short little game. I love the art style and combat is smooth and fun.

Nice Game! It looks really well polished and is quite fun to play :)

This is a wonderful game, but I'm a little confused on where to go right now. I've beaten Dracula, and I'm currently in the tunnels with the bug character. What do I do?

How did you beat Dracula... I'm stuck. Please help?

Reply
Nat the Chicken1 year ago

I don't know how others did it, it seemed doable with the witch character if I learned the patterns, but I wanted to try something else, so I went and got the bug character, and it turns out that you can kind of "cheese" him during his bat state. He won't actually leave that state until the bats around him are all gone, and if you just stand on the floor and throw bugs (moving all the way across the room to despawn them when you have too many), they'll do an initial jump straight into him without hitting the bats above him. So if you do that for long enough, he dies.

That said, I would also like to know what to do in the tunnels after that. I found the dev cave and the tied-up villager and then died, losing that progress, and everywhere else appears to be a dead end. There are a couple dead-end rooms, and I thought maybe the bug would be able to dig, but nothing's working. I just go down and die again and again.

I cheesed him with the Witch character too. Just followed around underneath him pelting him with fireballs, and the bats up top never bothered me. Even doing that, I'm amazed how long it took to kill him. Dracula has WAY too much HP.

fun! i love gameboy games, this was a notable one!

Amazing game, i only really got stuck on the sewer monster

nice game. kinda weird that there was no boss

Like the game, took me 10% exploring the castle and 90% beating the ass of Dracula.

Great game, found myself 14 Villagers, it is a bit frustrating though that I have no idea if that is all of them or if the mushroom/dig guys still hold a secret to unlock.

very nice the pixels art nice butt can you add a shield  .over all a very nice gam

It was a very enjoyable game, love the sprite work and gameplay. I'm not really good with metroidvanias, but I had a good time playing.

And the jump+spamAttack is so funny to me, you just gliding with your sword.

this is a great game, but I'm curious to know as to how to wipe the save data